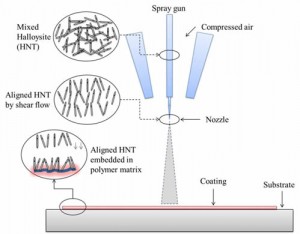 Solar cells are widely utilized for harvesting energy. They are susceptible to loss of efficiency owing to collected dirt and grime as well as from abrasive mechanical damage. The cost associated with cleaning and maintaining the solar cells can be very high depending on the location of the cells and the availability of water resources nearby. It would be desirable to fabricate a low-cost, readily-processed multifunctional coating for solar cells that is abrasion resistant, self-cleaning, anti-reflective, self-healing and anti-static. During the first year of this ambitious project our collaborative team addressed the anti-reflection, bulk mechanical and tribological properties of epoxy-based coatings. Halloysite nanotubes (HNT) were identified as low-cost, easily obtained reinforcing fillers for mechanical property enhancements.

The halloysite nanotube-filled epoxy composite coatings were fabricated using spray-coating methods. We found a range of processing conditions for which the HNTs were aligned by the hydrodynamic flow conditions at the spray nozzle, and the polymer viscosity helped to preserve this preferential orientation in the final coatings on the target substrates. Electron microscopy demonstrated a consistent trend of higher orientation degree in the nanocomposite coatings as viscosity increased. The nanoindentation mechanical performances of these coatings were studied using a Hysitron TriboIndenter device. Composites showed improvements up to ~50% in modulus and ~100% in hardness as compared to pure epoxy, and the largest improvements in mechanical performance correlated with higher alignment of HNTs along plane normal direction. Achieving this nanotube alignment using simple spray-coating method suggests potential for large-scale production of multifunctional anisotropic nanocomposite coatings on a variety of rigid and deformable substrates. The best coatings were optically transparent with transmission values near 93 percent. Improved optical performance, including antireflection properties, and control of wettability will require systematic alteration of the surface chemistry and nanoscale roughness of the nanocomposite coatings. These are topics under current investigation.